The most wonderful time of the year has arrived: Award Season!! Okay, maybe not the MOST wonderful, but it sure is fun, isn’t it? I realize the Oscars (and the like) are basically 95% rich people patting each other on the back, 3% awarding actual talent, and 2% remembering who died that year…but it’s one of my favorite things to participate in every year. It’s mostly just because I love film so much and get emotionally invested in my favorite films of the year.

Without further adieu, here are my favorite films of 2014!

(One note: I watched a LOT of movies in the past 4 months, but I didn’t get to see The Theory of Everything. It may not have even made the top 10, but just thought i’d throw out that disclaimer)

Nate (the fiance) pestered me to read this book, but i’m glad he did. Aside from the ending, I loved the whole thing. I love a good mystery and Gillian Flynn did a fantastic job with the plot and even better with the characters. Definitely a page turner. When I heard Fincher was going to be tackling the film adaptation, I was excited, primarily because he can do dark AND humorous in a severely interesting way. I personally think he nailed it. There was quite a bit missing from the characters in the book (for instance, in the book you REALLY hate Nick Dunn and you REALLY think Amy is a PSYCHO. Caps for emphasis) And they just didn’t really play that up enough in the film. But other than that, it was a fantastic version of the book w/ memorable performances from Rosamund Pike and Neil Patrick Harris.

What a seriously fun and fiercely edited/directed film. Basically, we are in an all-out war with alien forces and they posses the ability to re-start the day and therefore, know the future. An officer (Tom Cruise) is enabled with the same ability and when he figures it out, he teams up with a legendary warrior (Emily Blunt) to try and end the war. It is about as action-filled as an action movie can get, with the hilarity of a “Groundhog-day like” scenario thrown in. It also has the pacing and general sensibilities of a video game, which makes it all the more fun to watch. It may not be as “important” as some of the other films on this list, but it was about the most entertained I’ve been in a long while. 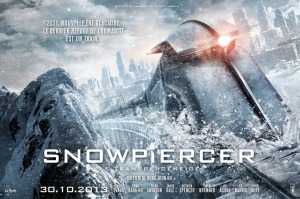 I feel like this film really had a polarizing effect: People either truly love it (me) or really hate it. The action-adventure/dystopic/sci-fi/anime themes and styles it had were totally up my alley. It brought a fresh idea to the post-apocalyptic genre (they’re all on a train?! Everyone on Earth??) as well as the allegorical haves-vs-have-nots (basically the 1% is at the front of the train and 99% at the back). Each train car represented something we have in our society as well as represented the different people we have in our society. Having the “have-nots” literally work their way from the back to the front created such an interesting film structurally. It also had one of the best performances of the year from Tilda Swinton (duh). It was a wonderfully dark fantasy with great humorous elements that was committed to itself the whole time. I mean, what a ride (literally!)

I only just saw this yesterday and it’s why I waited to do this list: I knew it would make it. This movie was incredibly powerful and it is shocking to realize its the first major motion picture made about MLK Jr. But I’m glad it’s the first because it did his legacy justice. David Oyelowo completely captures Dr. King as a person as well as the fact that he was one of – if not, THE – greatest orator of our time. I started crying many times during his speeches because I felt a tiny morsel of what it must have been like to have been in his presence. The film itself had some trouble with pacing, often switching from crawling to sprinting without much a transition. But that was really the only flaw. The music was wonderful, the writing was well done, and most importantly, they cast the most perfect person to become Martin Luther King, Jr. 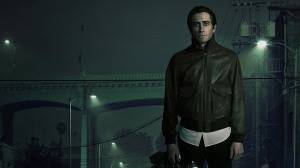 An absolutely stand-out performance by Jake Gyllenhaal, coupled with some great cinematography and a weirdly fascinating storyline is what made Nightcrawler such a powerhouse. This creepy, psychological thriller is one of the strangest movies I’ve ever seen and explores a type of person I’ve never seen portrayed before either. It teeters on scary but never goes over the edge, which is perfect because you’re just left with an eerie uncomfortableness that lingers after the movie has ended.

Nolan gets a lot of (undeserved) flack for a variety of things, but one of the biggest is that he doesn’t have enough emotion in his films. But I think people are looking for the most common depiction of “emotion”, and in Nolan’s films it can be drummed up in different ways. I find space and the concept of of our place in the universe to be very emotional and Nolan’s Interstellar really dove into a lot of that. There were so many moments of wonderful tension, literally awe-inspiring shots, and a very honest message about our Earth and our future. The story may not have been perfect but I think it was some of Nolan’s best directing to date. And that score!!

Much like Boyhood, Alejandro González Iñárritu managed to give me a film I had never seen before. Dizzying, playful, in your face, tense, and often self-consciously meta, Birdman aims its fingers at deconstructing the pretensions of nearly everyone involved in the entertainment world (here it’s on the stage, but it’s just as much about film actors, too). The film was almost like watching a poem of the Beat Generation; like it had it’s own iambic pentameter (the drum score helped with that). But it also helped that Emmanuel Lubezki, of Children of Men fame, was the cinematographer and designed the film to look like it was done in one, unbroken take. It really feeds the pace and attitude of the film perfectly. It’s sort of hard to describe this film, which I love, because then I can just say “You have to see it for yourself!”

Oh my dear Wes Anderson. I have loved him for a long time, falling for him first when I saw Rushmore and many more times after that. But I was highly disappointed by Moonrise Kingdom, worried he had finally become a parody of himself, his movies looking more “in the style of Wes Anderson” than by Anderson himself; The Grand Budapest Hotel has saved me from my worries, as it is one his best films – maybe THE best – to date. It was an adventure film, a thriller, a caper, a romance, a comedy and a story-within-a-story (within a story, perhaps?) … and done so seamlessly. And Anderson’s set design/directon is always the best, but this one may be the best of his entire filmography. Intricate and beautiful. 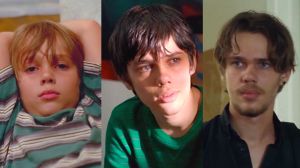 You’ve heard about how Linklater made this film by now, but that doesn’t make it less impressive. Linklater committed 12 years to this project,which deserves an award all by itself. It’s hard in this day and age to do something wholly unique and different in the world of film, but Linklater pulled it off – and with flying colors. It was so touching and incredibly moving to almost literally grow up with these people – who we know are actors – that felt like family at the end of the film. So many movies try to achieve this and fall short. Because you feel so close to these people (its hard to call them “characters”), you are actually emotionally invested in their lives, their futures. The writing may not have been perfect, but the direction, the ambition and the heart make it an incredible achievement.

Without wasting one second of it’s 107 minute runtime, Whiplash (which is only the second film from director/writer Damien Chazelle), is an absolute edge-of-your-seat drama about what it means to be a legend and how hard you will push or be pushed to achieve that. This film is acted with precision and purpose, both by Miles Teller and JK Simmons, but Simmons is the absolute standout, taking his villainy band teacher to a whole new level. I have loved him for a long time, but this pushed him into the mesosphere of great actors. And Chazelle’s directing/writing is spot on, but the editing and the cinematography is where this filmed soared for me. There were moments so taut with anxiety and tension I thought I was going to pull the armrests off the seats in the theater. Chazelle and Co. successfully keep that tone throughout the film and push it only where necessary. Oh, and that last scene? Holy. Shit.

Read These Blogs, too!

Through it all, your spirit's alive

A collaborative blog on nerd culture

My name is Alex. I have pop culture feelings. Updates every Friday (usually). Slight tendency to edit as I go.

My view on films as I see them. Take it, laugh, share it, leave it. Above all, enjoy!

criticism of the best and worst: media, culture, and more.